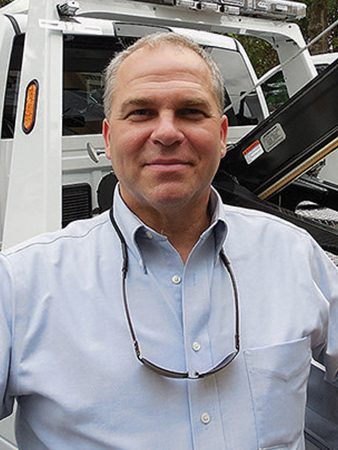 Bill Giorgis is known in towing communities worldwide: for his brilliance, his commitment to improving the industry both internally and externally, his leadership, his true caring for those in need of assistance, and his unwavering generosity. Willing to help a fellow operator, he is often on the phone or emailing fellow operators who have reached out with a question or concern. He shares the good and bad as an instructor at shows including but not limited to Florida Tow Show, Tow Summit, Ohio Tow Show, Tennessee Tow Show, addressing topics ranging from water recoveries to OSHA audits with a focus on safety.

Many within the industry believe him to be one of our most vocal and well-spoken advocates, eloquently speaking to legislators, the media and fellow towing companies. As president of the Michigan Towing Association, he helped build strong ties in Lansing, appearing before legislators and negotiating with lobbyists on pertinent issues. He also led the national charge as president of TRAA, gaining great credibility for TRAA within the D.C. community. His long-standing accomplishments include conceptualizing and creating the “Law Enforcement Vehicle Identification Guide” still in use today. His commitment to improving safety within the industry has led to many speaking engagements within and outside of the industry.

Bill believes in the betterment of the industry and works with young towing company owners to develop their sense of community for the industry on a national scale.

President, Michigan Towing Association (many years) President, TRAA (several years) Vice President, TT Publications Inc. – has been an officer or served on their board for 20+ years Inducted into the Hall of Fame, Class of 2002